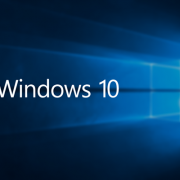 As Microsoft confirmed during IFA 2018, we now know that “Windows 10 October 2018 Update” is the official name of the next feature update to the operating system we’ll be getting from Microsoft. You’ll probably know it better by its official version number — 1809, the upgrade from 1709 — or by the code name it’s been using during the past months in beta, Redstone 5.

As always, it will be a free download for current Windows 10 users.

It follows Microsoft’s recent change to its Windows 10 update naming conventions from the more ambiguous ones like “Fall Creators Update.” Especially since the forthcoming October update doesn’t really have any thematic changes Microsoft can link it to. Some of the more notable changes it brings are:

(We’ve covered some of these features in the past; click the links above for more info. Also, these were the 7 best new features in Windows 10’s previous April update.)

While Windows was once Microsoft’s core focus, under CEO Satya Nadella, the PC and tablet operating system become more of a means to an end: delivering value-added cloud-based services to corporate clients and consumers.

Want to join the discussion?
Feel free to contribute!